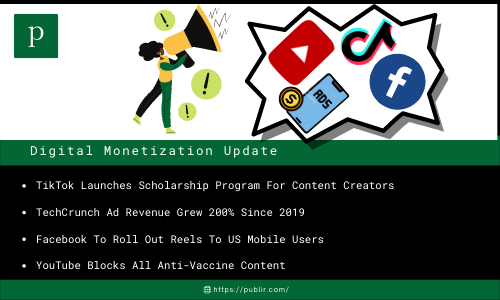 LINK Agency, a TikTok advertising creative wing, has created a “scholarship program” to teach creators in platform optimization. The six-month program will train three “budding ‘TikTokers’” in LINK’s cutting-edge knowledge. Three winners will be chosen based on the needs, passions, and dedication to the content production of the candidates.

TechCrunch’s operations team decided in January that all events would be virtual for the rest of the year. Now, the publisher is on course to have its biggest year ever in terms of revenue. Since 2019, TechCrunch’s ad income has increased by 200%, and the number of subscribers has almost doubled. The firm refused to give precise statistics.

3. Facebook To Roll Out Reels To US Mobile Users (TechCrunch)

After a month of beta testing, Facebook is now rolling out Reels to all Facebook users in the United States on both iOS and Android. The company is launching a new bonus scheme that will compensate artists when their Reels are viewed. The program will be financed as part of Facebook’s $1 billion commitment to creators until 2022.

YouTube will now prohibit all anti-vaccine content, expanding its ban on misleading information regarding COVID vaccinations, including disinformation about other authorized vaccines. Channels connected with many famous anti-vaccine campaigners, including Robert F. Kennedy Jr. and Joseph Mercola, have also been banned from the video platform

Amazon has launched the IMDb TV streaming service in the UK, more than two-and-a-half years after its debut in the US. The video-on-demand streaming service owned by Amazon was launched in January 2019. This ad-supported channel was freely accessible within the Amazon Prime Video app since its inception.

Twitch announced that it is rolling out phone-verified chats, a safety feature to help keep harassment, malicious users and hate raids under control. Phone-verified chats will allow targeted creators to have more control over who can participate in their communities. Twitch allows one phone number to associate up to five accounts with it.

Amazon is bringing another voice assistant to Echo devices created by Disney. The new voice assistant called “Hey, Disney!” is based on Alexa technology. Fans will be able to interact with the assistant through over 1,000 custom interactions, many of which will contain real character voices and original recordings from Disney’s vast library.