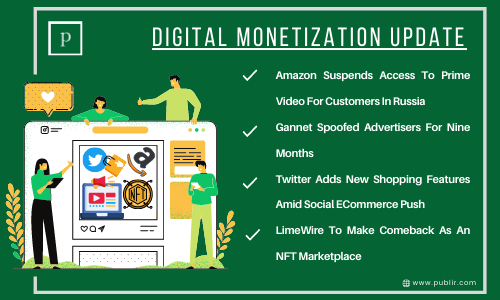 Amazon has joined the growing list of companies that have halted operations in Russia as a result of the country’s aggressive aggression on Ukraine. Given “the ongoing situation in Russia and Ukraine,” the eCommerce giant announced that consumers in Russia would no longer be able to access Prime Video.

Gannett, the publisher of USA Today and many other news media sites, gave false information to advertisers for nine months, misrepresenting where billions of adverts were displayed. Advertisers assumed they were purchasing an ad on one Gannett site, but they were actually purchasing space on another.

Twitter is testing a new way to show tweets that link to eCommerce product pages, such as those on a Shopify store. The firm is experimenting with tweets that contain a large “Store” button and incorporate product data right into the tweet itself, including the product name, shop name, and product pricing, using a new Twitter card format.

4. LimeWire To Make Comeback As An NFT Marketplace (Bloomberg)

A pair of serial entrepreneurs from Austria have purchased the rights to the defunct music network LimeWire, with ambitions to rebrand it for the next generation of internet users by selling NFTs tied to music, material, and artwork. LimeWire, one of the first web-based music consumption platforms known for illegal downloads, was shut down in 2010.

Twitter is introducing a Tor onion service version of its site, optimizing it for the privacy-protecting and censorship-eluding network. Software engineer Alec Muffett shared the news on Twitter calling it “possibly the most important and long-awaited tweet that I’ve ever composed.” Tor has also been added to Twitter’s list of supported browsers.

After appeals from regulators and consumer groups for a tougher crackdown on scams, the UK will force Google, Facebook, Twitter, and other online platforms to block paid-for false ads. The proposed law on combating online harms would force huge platforms to tighten their security against those who steal personal data or breach into bank accounts.

7. Google To Acquire Cyber Defense Company Mandiant For $5.4B (MediaPost)

Google intends to buy Mandiant, a cyber protection and response firm, in an all-cash deal for $5.4 billion. The deal will address the current cybersecurity concerns that companies face. The integration will help firms to detect and respond quickly to threats, as well as analyze and automate threat information to ensure that their assets are protected.

According to sources familiar with the case, Amazon is anticipated to gain unconditional EU antitrust approval for its $8.5 billion acquisition of MGM, a move that would increase competition with streaming competitors Netflix and Disney+. The merger would also help Amazon’s video streaming service by enticing customers to sign up for Amazon Prime.