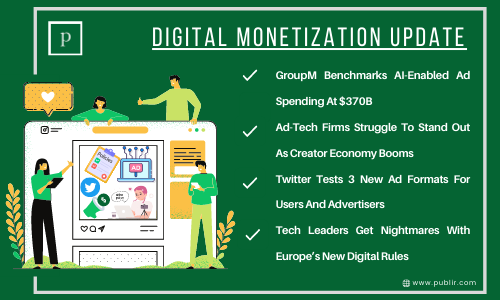 According to a new proprietary projection provided by GroupM, artificial intelligence (AI)-enabled media will account for $370 billion in ad spending this year, representing the majority of all ad sales. By 2032, AI-enabled media ad spending is expected to exceed $1.3 trillion, accounting for more than 90% of all ad spending.

As the creative economy grows, more firms are searching for creators to help them promote their products. In fact, the percentage of marketers adopting influencer marketing is expected to climb to 72.5% in 2022, up from 55.4% in 2019. However, not all creator marketing platforms are the same.

Twitter is testing three new ad types to simplify and improve the efficacy of its advertising suite. Twitter expects that the new formats will provide advertisers more creative and inventive alternatives while giving consumers a more engaging experience. Pilot testing has started for Interactive Text, Product Explorer, and Collection Ads.

5. Bloomberg Looks To Subscription Revenue For Stability Not Ads (AdExchanger)

6. MailChimp Was Breached And Hundreds Of Accounts Accessed (TechCrunch)

Mailchimp, the world’s largest email marketing provider, has revealed a data breach after rogue hackers accessed an internal corporate tool to obtain access to client accounts. According to the organization, hackers visited around 300 Mailchimp accounts and successfully extracted audience data from 102 of them.

According to officials, iHeartMedia, the parent company of iHeartRadio, is investing several hundred thousand dollars in acquiring the rights to about a dozen NFTs in order to launch a new NFT-based podcast network. It is one of the first big media brands to launch a podcast slate of characters and voices from various NFT collections.

Dropbox Shop is now in open beta, bringing fresh upgrades to the platform as well as tipping possibilities. You may now personalize your shop and URLs, as well as integrate HTML codes. Last year, Dropbox Shop went into private testing, allowing users to create product listings for digital content.