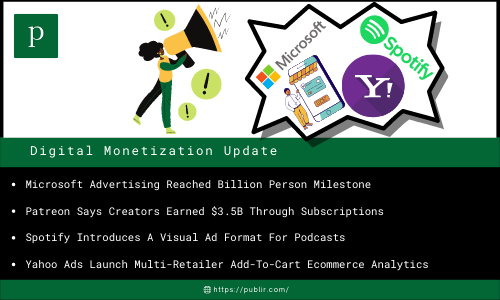 Patreon had a surge during the pandemic shutdowns. The nearly nine-year-old startup earned $245 million in capital in less than a year, thanks to an increase in engagement from online performers and fans. Patreon creators who use its subscription services have earned $3.5 billion throughout the duration of the startup’s life.

Spotify introduces a new ad style for podcasters – “Call-to-Action” Cards or CTA cards. When the audio ad begins to play, the feature will display a visual ad in the app. Advertisers can customize the cards with their own images, text, and other clickable buttons that urge listeners to “shop now” or take action that the advertiser wants to encourage.

Signal added a payments feature in beta for its UK customers in mid-November, testing out a connection with MobileCoin, a new privacy-focused cryptocurrency. The feature is available to all users, allowing them to send digital payments to millions of phones in a significantly more secure manner than a credit card transaction or a Bitcoin transfer.

LinkedIn is launching a new events platform that will allow users to post, host, and promote interactive, virtual live events. It will begin with an audio-only product, which will be released in beta this month, followed by a video version in the spring, with an initial focus on creators who use LinkedIn as organizers and hosts.

GameStop Corp is forming a division to build a marketplace for nonfungible tokens (NFTs) and establish cryptocurrency partnerships, lifting the video game retailer’s shares by 27% in extended trading. When the company’s marketplace starts later this year, it will ask select game creators and publishers to advertise NFTs.