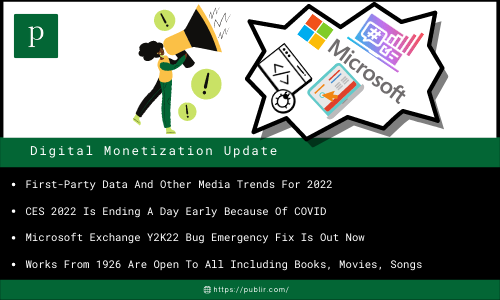 1. First-Party Data And Other Media Trends For 2022 (AdExchanger)

Platforms with dedicated opted-in audiences will be well positioned to monetize their first-party data sets in 2022 and beyond. Publishers that have been slow to transition to first-party data will be pressed to fulfil Google’s newest deadline of the termination of third-party cookies in Chrome by the end of 2023.

The Consumer Technology Association announced the last day of CES 2022 tech conference in Las Vegas has been cancelled, and the event will end on January 7th. In the context of an increase in COVID-19 diagnosis, the shortened timeline is “an additional safety measure.” It is the world’s largest tech conference, attracting over 10,000 people each year.

As copyrights expire, books, movies, and songs released in 1926, and an estimated 400,000 sound recordings published before 1923, enter the public domain in the US. Online archives like the Internet Archive, HathiTrust, and Google Books can make works available online to gain access to cultural resources that might otherwise be lost to history.

According to a study by eGain, email marketers must consider this when driving customers to their company’s interactive voice response (IVR) experience: 88% of respondents said an IVR they met was not intelligent, and 38% said it was dumb or somewhat so. 60% have tried to reach a call center representative regularly, and 26% have done so frequently.

Brandon Silverman has been with Facebook since the company acquired his start-up, CrowdTangle. He no longer works at Facebook, but in the weeks after his departure, he has been working with a bipartisan group of US senators on legislation that would require the large social media platforms to provide transparency that pushed him out of Facebook.