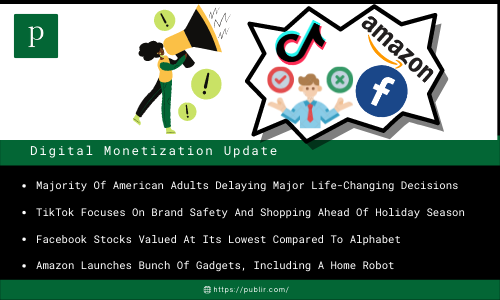 According to GfK’s Consumer Life study, the majority of American adults have postponed plans that may lead to life changes, including college studies, job changes, starting a family, retiring, and traveling long distances, as the pandemic affected lives badly. This may have severe implications on marketing several consumer products and services

2. TikTok Focuses On Brand Safety And Shopping Ahead Of Holiday Season (AdAge)

On reaching the 1 billion users mark, TikTok announced deals and ad products. It partnered with DoubleVerify and Integral Ad Science to ensure brand safety and accuracy for in-feed video ads. It teamed with Vimeo and Canva to create templates with the best fonts and creative elements. Instant Page, its new ad format, rewards users for watching videos.

3. Facebook Stocks Valued At Its Lowest Compared To Alphabet (TheInformation)

According to data from Koyfin, an online analyst platform, Facebook’s stock is currently trading at its lower valuation. It is trading at the biggest-ever discount to Alphabet’s valuation. Factors like Apple’s iOS data changes, antitrust lawsuits, and the recent controversy over Instagram teens seem to have affected investors’ trust in Facebook.

4. Amazon Launches Bunch Of Gadgets, Including A Home Robot (CNBC)

Amazon announced a bunch of new tech gadgets at its fall product event, ahead of the holiday season, on Tuesday. They include a home robot named Astro, equipped with an Alexa voice assistant, a video doorbell, a new video-calling device that projects games for kids, and a Halo View fitness tracker among other things.

Albertsons Inc., an American grocery company, is planning to launch a shoppable video with content around recipes and meal preparation, using foods that are on its shelves by brands it supports. The launch, scheduled for mid-October, aims to connect retail stores, CPG marketers, and clients with recipe tips through shoppable videos and streaming.

L’Officiel magazine will celebrate its 100th anniversary this week by launching a virtual museum that will chronicle fashion history over the last century and forecasts the future. The museum opens on Thursday and features L’Officiel global cover stars like Jessica Chastain and Maluma and artworks from the magazine’s 100-year archives.

7. Creators Leaving Clubhouse For Not Getting Opportunities (TheVerge)

Creators are leaving Clubhouse’s Creator First program, as they are not getting brand sponsorships. Clubhouse failed to turn any of the creators’ shows into a sustainable endeavor, complained six creators that left the platform. They had to negotiate with brands on crowded live audio shows and failed to get opportunities when the program closed.