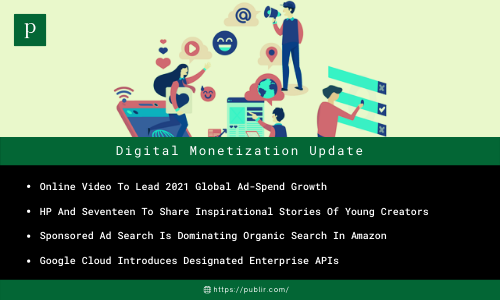 HP and Hearst Magazines’ Seventeen are partnering to share stories of young creators who are promoting STEM training. A 7-minute documentary profiling a 16-year-old Jay Patton, founder of Unlock Academy, an online and in-person coding school for young people into technology will be shared across Seventeen’s multimedia and social platforms.

Google Cloud on Monday is rolling out a new designation for a set of APIs that are important for enterprise customers across Google Cloud, Google Workspace, and Google Maps Platform. The new Enterprise APIs are governed by a set of tenets to ensure that any changes will bring as little disruption as possible to the customer.

HBO Max streaming network Pa’lante is kicking off a week-long pop-up in New York’s Washington Heights neighborhood. The interactive program called “a love letter to bachata,” begins on July 30 and concludes by August 6, will release two HBO Max streams on Latin American music and dance style, popular in the Dominican Republic since the early 1960s.

APPLE has released an iOS fix, the 13th zero-day fix of the year, over a vulnerability that would allow hackers to take over your device. The fix was reportedly for iOS, iPad OS, and macOS; and the company has encouraged users to update to avoid the vulnerability.