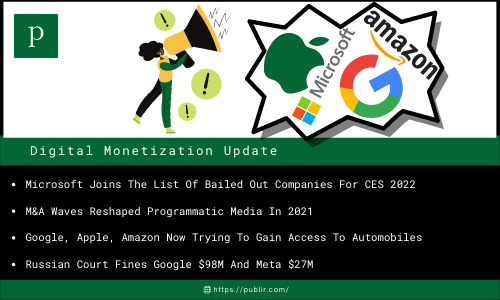 1. Microsoft Joins The List Of Bailed Out Companies For CES 2022 (CNET)

As the omicron version causes a rise in coronavirus infections, CES 2022 continues to lose major exhibitors. Microsoft stated that it will no longer be present at the Las Vegas tech exhibition, which begins on January 5. T-Mobile, Google, Intel, Lenovo, TikTok, and Meta are just a few of the firms that have made the move to virtual-only appearances.

The year 2021 has brought a sea change in programmatic media. Ad tech and mobile marketing businesses flooded the stock market, and already-public companies such as Magnite, Digital Turbine, and Media and Games Invest (MGI), which owns the ad tech company Verve Group, were active consolidators.

Google and Apple with Amazon are now trying to control how people use automobiles as Americans spend more time behind the wheel than anywhere else outside their home or job. Some lawmakers and regulators see the debate over linked automobiles as an opportunity to prevent possible monopolies from forming.

A Moscow court fined Alphabet’s Google 7.2 billion roubles ($98 million) for failing to erase content that Russia considers illegal. On the same basis, the court fined Meta Platforms 2 billion roubles ($27.15 million). This year, Moscow has boosted pressure on big tech in an effort by Russian authorities to establish greater control over the internet.

Meta unveiled several major changes to its advertising objective selection experience in Ad Manager, culminating in a system called Outcome-Driven Ad Experiences (ODAX). The primary goal is to simplify and streamline the present interface by making it outcome-based, simplifying objectives, and concentrating on the most basic options and tools.

6. AppLovin With MoPub Forecast To Process $15B In Annual Ad Spend (MediaPost)

Last October, AppLovin paid $1.05 billion for MoPub, an in-app monetization technology platform for app publishers, which it acquired from Twitter. By 2023, the merged platforms are expected to handle over $15 billion in annual advertising expenditure. The deal is expected to finalize in early 2022.

7. Steam’s Global Version May Have Been Banned In China (TheVerge)

According to a tip from TheGamer, Steam Global appears to have been banned in China. Only the Chinese edition of Steam is still available in China, with a limited catalogue of only 103 titles – a tiny fraction of the approximately 110,000 games available on Steam Global at the time of writing.

TikTok has been sued by a moderator for causing trauma as a result of violent videos. Candie Frazier, the moderator, stated that she had aired videos depicting violence, school shootings, tragic falls, and even cannibalism. TikTok allegedly compels moderators to work 12-hour shifts with only a one-hour lunch break and two 15-minute breaks.